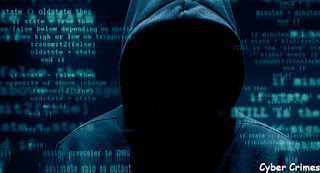 Cybercrime is the crime that involves a computer or Smartphone and a network. The computer may have been used in doing a crime, or it can be the target. In simple words – Cybercrimes may be defined as: ‘Offences that are committed by individual or a group against individuals or groups of individuals with a bad criminal motive to intentionally damage or harm the reputation of the victim/Organization or cause physical or psychological harm, or damage, to the victim/Organization directly or indirectly, using modern networks such as Internet (networks including Email, Spam Emails, Chat rooms, messages,   notice boards & groups) and Smartphone (SMS/Bluetooth/MMS)’. These crimes can threaten a person or a whole nation’s security. Issues surrounding cybercrimes have become high-profile, particularly those surrounding threatening, hacking, unwarranted mass-surveillance, copyright infringement, extortion and child pornography. There are major problems of privacy when sensitive and confidential information is intercepted or disclosed, lawfully or otherwise.
Another definition of cybercrime from the perspective of gender and defined “Cybercrime against women as “Crimes targeted against women with a aim to intentionally harm the victim physically and mentally, using modern networks such as net, computer and Smartphone”. Cybercrime should also be referred to as computer crime.
Cybercrimes generally encompasses a wide range of activities, but these may generally be broken into 2 categories:
Types of Cybercrimes